All of us leave ‘footprints’ on the planet, but many are not even aware of it, or if they are, they may not know how they can lower their environmental impact. According to the World Wildlife Fund and the Global Footprint Network’s 2010 Living Planet Report, humans are consuming natural resources at a rate that far exceeds the planet’s ability to replenish them. The report states that “demand on natural resources has doubled since 1966 and we are currently using the equivalent of 1.5 planets to support our activities.” If we continue with the ‘business as usual’ model, consuming at this same rate, by 2030 we will need the equivalent of two planets to meet our annual resource demands. These alarming figures illustrate the need for a drastic change in lifestyle and consumption trends across the globe, and the need to adopt more sustainable daily habits.

Sustainable development is most commonly defined as “development that meets the needs of the present without compromising the ability of future generations to meet their own needs.” In practical terms, this means that our daily activities should not only be sustainable in the sense that we are consuming natural resources at a rate that can be replenished, but that we are also conserving these resources for generations to come. The statistics clearly show that we are not doing either of those. While the concept of ‘sustainable development’ is relatively well known in the world, sustainability in Serbia is still a new term and field of study – one that is often used as a marketing tool but lacks substance beneath the surface.

Serbia faces a significant sustainability challenge. In addition to a lack of awareness when it comes to sustainable development and the environment, citizens often feel that their lifestyle habits do not affect their environment, regardless of whether that contribution is positive or negative. Often they will forget to switch the lights off behind them or they will leave the faucet running while brushing their teeth, and not think twice about it. These are very small things that people do, but one can identify hundreds of easy changes in our habits to ensure that we are living more sustainably. From our choices of transportation to our consumption – the key word here is ‘choice.’ We can and should choose to lead more sustainable lives, both for ourselves and for the future generations, but first we must understand what sustainability really means. 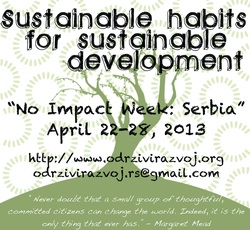 The aim of the Sustainable Habits for Sustainable Development project is to raise awareness of sustainable development, primarily among young people in Serbia and the Balkan region, as well as to demonstrate how small changes in behavior can have a lasting impact. This project was a collaborative effort between Aleksandra Sokolovic (who at the time was a journalism student at the Faculty of Political Sciences in Serbia) and myself. The two of us developed and launched the project as part of the National Democratic Institute’s Young Leaders of Serbia program in February 2011, in order to raise awareness of sustainable development and issues related to the environment, economic development and social equality, both globally and locally in Serbia. We relied heavily on social media to ensure the success of this project, building a following on our website, Facebook account, Twitter, Flickr and LinkedIn. Since the website went live in Spring 2011, it’s been viewed more than 35,000 times, and we are linked to 4,000 followers on Facebook.

The project envisaged a week-long sustainability campaign, inspired by the No Impact project, to inform people in Serbia (primarily youth) about these issues, and to increase awareness of the lasting impact that daily behaviors can have on the environment and society. Although the original goal was to bring together a group of at least 25 participants (aged 18-30) primarily from the capital city (Belgrade), over 100 people from all over Serbia signed up to participate in the campaign!

The campaign lasted from April 18-24, 2011 with informative daily topical emails and challenges. Through this experiential learning component of the project, we hoped to increase the likelihood that these habits will be implemented sincerely and conscientiously. We actively monitored the project’s implementation using online eco-journals developed for this project, and shared analyses of these results on the website and in research publications. These survey-based eco-diaries helped ensure that the participants were taking the suggestions to heart and were used to motivate them to actively participate in this sustainability week by exchanging their impressions, sharing experiences, or requesting more information on certain topics as they attempted to live “No Impact.” Given the positive results of this first experiment and the interest of partner organizations (such as the Center for Environmental Policy and Sustainable Development), we repeated this initiative in April 2013.

Detailed results of the campaign (in Serbian) are posted on the project’s website. They indicate that the respondents adopted some new sustainable habits during the week and positively rated the campaign and the project as a whole. The initiative also sparked interest from the media, and was featured on national news in Serbia. 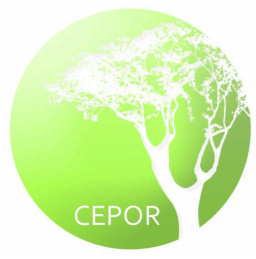